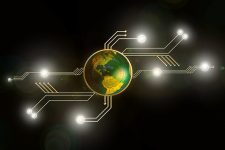 After much consolidation bitcoin and the crypto market resolved to the downside.  There are several possible reasons for this.  However, most people like to find a clear catalyst for an event.

Many are looking at this hash war within the bitcoin cash blockchain as the catalyst for the decline.  Especially because it has a ripple effect on bitcoin itself.

Here is the roundup:

Basically there are two camps of people.  One led by Calvin Ayre, Steven Wright and CoinGeek.  The other led by ABC, Bitmain, Jihan Wu and ViaBTC.

They are competing against each other to operate a chain of BCH that secures consensus in the community.  As you may or may not know, consensus on a chain is rather important for anything to essential move forward.

As we all do know, bitcoin is still the lead dog when it comes to crypto and the market direction.

So here is the rub; bitcoin cash, which is a fork of bitcoin, is doing it’s own hard fork (which is thing that is causing the drama).

There is disagreement over the bitcoin cash hard fork which is leading to something a kin to a civil war.  Calvin Ayre’s group has essentially made threats with a hash power competition that could be a shot at making a 51 percent attack.

If you are unfamiliar with a 51 percent attack, it is basically when one person or group control enough hash power to control more than 51 percent of the block chain.

With all this going on people are worried that the networks of bitcoin and bitcoin cash will slow down and impact transaction times among other things.  So you get that wall of worry sell effect and then it ends up triggering stops as well, such as at the 6k level and boom here we are.

I actually hope this was the catalyst for the sell off as it is something that will eventually play out and resolve and then crypto can be on it’s merry way after one last flush out.

Only time will tell though!