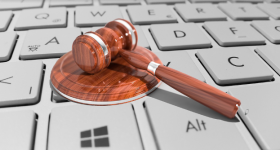 The speculation can finally be put to rest. A bitcoin ETF coming to market in 2018. Not happening and the Securities and Exchange Commission (SEC) pretty much sealed the deal on it.

Most people were expecting a ruling on just the ProShares ETF applications as the deadline for those had arrived. However, the SEC decided to take care off them all in one fell swoop. Also denying the applications from Direxion and GraniteShares.

Below is verbiage from the SEC’s ruling:

Maybe I’m not much of an optimist, but on the other hand maybe I’m just a realist. The writing was on the wall with these as it was only months ago that the Winklevoss twins attempt at an ETF was denied.

Did we really think that much in the crypto market changed since then to alleviate the SEC’s concerns? I mean, come on let’s be logical here.

The manipulation and fraud concerns they have are technically still valid – atleast in the sense of traditional financial transacting, which is what the SEC does.

I guess since the ProShares were to be based off bitcoin futures as opposed to crypto exchanges that gave people a sliver of hope to ride on. However, I’m pretty sure there is one key item that will be needed before we see bitcoin ETFs…

Once there are at least a couple “qualified” custodians then maybe, just maybe the SEC will change its tune.

If you are unaware of what a Custodian Bank is, essentially it’s a specialized financial institution responsible for safeguarding a firm’s or individual’s financial assets and is not engaged in traditional retail or commercial banking.

If you remember Coinbase recently created a division to provide this service. Thus, we are headed in the right direction. I think it is just a matter of time before a “familiar” financial name comes on board with something like this. There is too much money to be made not too.

As for my guess on when we will see Bitcoin ETFs. I’m thinking sometime in Q1 2019 may have a shot.

Need to learn the basics about bitcoin, the blockchain and wallets?

Free e-book: ScaredyCatGuide to Knowing What the Heck Bitcoin Is