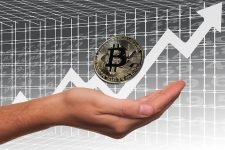 Roughly two weeks ago we looked at the total market cap of crypotcurrency.  At that time the overall worth of cyrpto was at a critical point to see if we were indeed going to get any kind of extended move higher in the crypto space.

Looking at the chart of total market cap, you can see the original support line (180 area) from the prior post.  Now I have added the new level (roughly 223)

The lower line was the initial breakout from the lows and a line in the sand for things to be not be considered bearish anymore.  That level was held easily as it was never re-visited.

In question was that second line, market cap has pushed above it and was testing it at the time of my prior post.  As you can see looking to the left on the chart, that level came into play several occasions.

We ended up getting the resolution we wanted.  Market cap tested and held the level and has now pushed up.

That is an orderly move, break through a key level then come back to test that level and push higher.  Technically you can’t ask for much more.  Thus this 223 area line is now the downside support for market cap and what we need to maintain to remain bullish.