What Happens When 21 Million Bitcoins Are Mined? 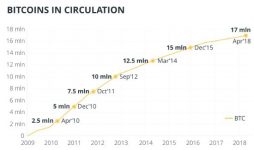 What happens when all 21 million bitcoins are mined?

That thought popped into my head earlier today. Will there be no incentive left for block producers to continue on?

First things first. When exactly can we expect to hit 21 million?

Yeah, I didn’t see that coming either considering 17 million coins have already been mined in just under a decade.

However, lest not forget that the block reward continues to half. Currently it is 12.5 bitcoins and is estimated to hit 6.25 in May of 2021 according to bitcoinblockhalf.com

Granted the 120 year timeline assumes no changes to the current protocol, so who knows.

What I am more concerned about (whether I will be living then or not) is what a fully mined bitcoin network looks like. What fee structure needs to be in place for block producers to profitably continue on?

Maybe the number of block producers will decrease to find a equilibrium between price and volume of transactions. Thus making transactions fees affordable while giving a producer enough volume so running a node makes sense.

In the end this is just an example of how young bitcoin and the cryptocurrency market is. It will be crazy to look back in 25 years even and think, wow I remember when…

Don’t know about you, but I look forward to it!

Need to learn the basics about bitcoin, the blockchain and wallets?

Free e-book: ScaredyCatGuide to Knowing What the Heck Bitcoin Is