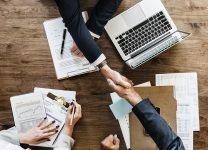 We have plenty of choices on what to do with our lives and while disconnecting is important we also need to recognize that real estate deals come along when they come along.  Sometimes that may not be convenient, but in the end success doesn’t come easy either.  If so, everyone would be doing it.

This past week I have been on “vacation.”  The quotation marks give it away as there was plenty of deal doing while roaming around Chicago and then the strip in Las Vegas.

It truly is amazing what can be done with our phones these days.

There is a duplex that a friend of mine got under contract and was looking to wholesale it.  I looked at it before I left town and it wasn’t a project I wanted right now.  So I sent out the bat signal to my network of fellow investors and managed to find another buyer.

Done and done, simple message, buyer and seller linked up.  Uhm, yeah not so much.

Turns out the seller was being a little “difficult” with the status of code violations and what not.  Also, the price my friend had it under contract for seemed to move once or twice due to the seller being temperamental.

Oh boy, here we go.  So as I walked through the streets of Chicago from one attraction to the next quick phone calls needed to be made to work through these things.

Elsewhere I was looking to acquire a four family up in MA where I have been investing with a local partner.  There was an open house and offers needed to be in the next day.  So there I was on the phone with my partner as I walked down the Las Vegas strip, the second of a three city adventure.

After which I talked to our realtor up there and gave her the details for the offer, which an hour later I reviewed from my phone and signed while shopping in Planet Hollywood.

Was it Worth it?

Well, that depends on how you want to live.  I love doing real estate deals and regularly say “Real Estate Never Sleeps.”   So yeah, it was worth it to me as in the end we are talking about a few hours time over the course of a few days.

In the end, the duplex deal looks like it will be done and I’ll receive some compensation.

The four family we didn’t get.   Even with a full price offer we were out bid by someone that decided to pay way over asking.  Which I was not willing to do.

Can’t get them all.  My partner already went to look at another one today, which we will talk about tonight before I catch my flight back home.